The restaurant will look out over a $4.3 million green space and a playground on Arapaho Road that’s been called a “mini Klyde Warren Park.” A lackluster shopping center has been replaced with family-friendly restaurants like Haystack Burgers, Andy’s Frozen Custard and Haute Sweets Patisserie. Don Pepe’s Rancho Mexican Grill is one of the newest restaurants nearby. Its opening in late 2021 was welcome news for neighbors, many who had eaten at owner Jose Jaimes’ Tex-Mex restaurants in the area since 1985.

By April 2022, a Cane Rosso pizza joint is expected to open at Hillcrest Village as well. 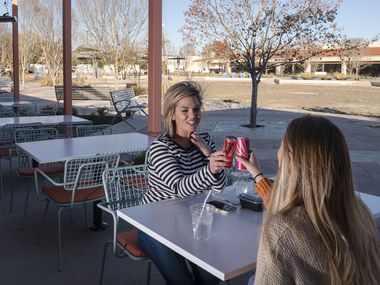 Howard Wang’s is a family-owned business named for its patriarch, who is Chinese but was born in Korea. The first Howard Wang’s opened in Preston Hollow in 2005, followed by restaurants by similar names in Uptown Dallas and Frisco. The restaurant in Southlake closed during the pandemic.

The restaurant in Far North Dallas will have a more focused Chinese menu, selling the company’s most popular items like General Tsao’s chicken, sesame chicken, fried rice and the like. Managing partner Jowin Wang, the son of owners Howard and Sook Wang, says the kitchen will largely sell dishes inspired by the Hunan and Sichuan provinces of China, though their style branches out to Korean and Thai flavors.

The family is also opening a ghost kitchen in Trinity Groves, which will deliver Chinese food to a much larger area of Dallas-Fort Worth with the help of services like Uber Eats.

The Wangs pared down the menu for that concept, too.

“It’s something we’ve always wanted to do,” Jowin Wang says. Their aim with the Far North Dallas store is to “do things simpler,” which means removing pricey fishes like Chilean sea bass and sticking with the favorites.

The reinvented Howard Wang’s will replace Lada, a short-lived enchilada shop with a menu created by a French-trained, fine-dining chef.

“Asian is a category that has been on everyone’s request list,” he says. “We wanted something that would activate the patio both at lunch and dinner.”

Howard Wang’s (which may go by a different name) will be at 6859 Arapaho Road, Dallas. It’s expected to open in spring 2022.