Fine dining has had a tough go in recent years. Even before COVID-19 severely restricted the swagger of in-person eating, much of the world was moving away from the highfalutin 17-fork trappings of an upscale meal. Instead, they began looking to street stalls, pubs, and casual bistros for culinary inspiration. Netflix began streaming the same kind of dramatically scored food worship for sidewalk noodles that it once reserved for white-gloved haute cuisine, and more than one publication officially declared the death of fine dining, or sees its demise coming. 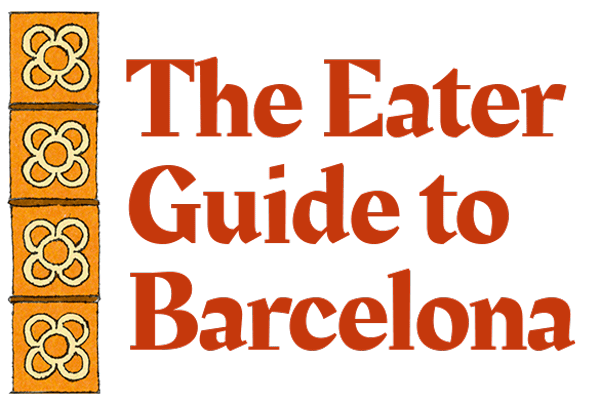 This trend has become especially true in travel — and rightfully so. In most cities around the world, stepping off the street and into a cushy dining room means missing out on important local culinary traditions in favor of a tablecloth and some generic amuse bouche. But Barcelona is different. Here in the birthplace of the spherified olive, a multicourse meal peppered with modernist bits and bobs is arguably as natural a part of the culinary ecosystem as jamón and vermut.

Today the city of just 1.6 million is home to 22 Michelin-starred restaurants and more tasting menus than you can shake a pair of tweezers at. The fancification of Catalan dining began in the 1970s, when the French nouvelle cuisine movement, which focused on fresh ingredients and delicate presentations, made its way across the border. But the real turning point came in 1987 when Ferran Adrià took over the kitchen at respected nouvelle cuisine restaurant El Bulli, on the Costa Brava north of Barcelona.

At El Bulli, Adrià began creating elaborate tasting menus of 30 or more dishes using hypermodern techniques. With culinary inventions like the aforementioned spherified olive, he transformed the restaurant into one of the world’s most legendary bastions of molecular gastronomy and deconstruction. In 2011, Adrià made the surprising decision to close the restaurant, but its legacy lives on in famous El Bulli alums like Italian chef Massimo Bottura; Gaggan Anand of Bangkok-based Gaggan (now closed); René Redzepi from Noma; Alinea’s Grant Achatz; and Barcelona-based hotshots Eduard Xatruch, Mateu Casañas, and Oriol Castro, the trio behind the 2019 fifth-best restaurant in the world, Disfrutar.

Even while some of the city’s upscale stalwarts have flagged during the pandemic — in April, Ferran Adrià’s brother Albert announced the permanent closure of all but one of his famed restaurants, including the legendary Tickets — there’s still no place that does a tasting menu quite like Barcelona. This style of dining remains poignantly relevant here. COVID hygiene awareness may have (very briefly) dampened our love for the Spanish tradition of shared tapas, but the tasting-menu concept, based around small, individually portioned bites, has never been more apropos.

Some might even argue that, after a year spent mostly in our PJs, there has never been a better time for the pageantry that surrounds the ritual of a slow, coursed-out tasting menu. And in Barcelona they can be found just about anywhere, from local neighborhood haunts to the smartest Michelin-approved establishments. In short, to get a full picture of Barcelona’s culinary culture, a full sit-down tasting menu should be on your list. But these meals can be splurges (to say the least), and while one multiple-course experience is well worth your time in Barcelona, it’s important to prioritize. Luckily there are options to suit almost every trip, taste, and most importantly, budget. Here, then, is our guide to finding the right one for you.

Disfrutar is Barcelona’s most lauded fine dining destination for good reason. Even with its two Michelin stars and fifth-in-the-world status, the service here is friendlier and less ostentatious than at many of the other restaurants in the upper echelons. Here, fantastical bite-sized creations from chefs Xatruch, Castro, and Casañas, like the multi-spherical tatin of foie gras and corn, are designed to surprise and delight. And while their elaborate brand of molecular cuisine is packed with pomp and circumstance, the ambiance is never too stuffy.

The mood: Well-heeled gastronomes anticipate each theatrical plating inside an airy, light-filled dining room that brings the outdoors in.
The damage: €€€€; “approximately” 20 plates
When to book: Months in advance to be on the safe side, but it’s worth chancing it a couple of weeks out for a midweek lunch.

Situated in Barcelona’s famed La Boqueria market, Direkte Boqueria remains unrivaled for price and quality. Snag one of only a handful of seats at the bar or a table on the new outdoor patio, where chef Arnau Muñío (2018 Fòrum Gastronòmic chef of the year) serves inspired, market-fresh (literally) local cuisine with Korean, Japanese, and Chinese influences. Think wild red wild tartare with pickled fresh cherries, baby almonds, wasabi and nori; cold soup of apple, clams and flowers; and decadent matcha-dusted brie cheesecake so creamy it starts oozing before you even break into it.

The mood: A tiny bar is a chill refuge from the busy and tourist-mobbed Boqueria market.
The damage: €€; nine or 12 courses
When to book: A couple of weeks to a month in advance.

For flashy drinks and a crowd to match

Founded by a chef-mixologist team who worked together at Gaggan, the Bangkok-based gastronomic powerhouse named Asia’s best restaurant for four consecutive years, the Alchemix is one of the hottest restaurants in Spain. Chef Sergi Palacín (shortlisted for Spain’s young cook of the year in 2020) and barman and pastry chef Ignacio Ussía are the chefs at this “gastro-cocktail bar,” which makes art out of blending Palacín’s Mediterranean ingredients with Thai and Indian flavors and Ussía’s mixology. And while cocktail pairings elsewhere can be hit-or-miss, the concoctions here bring out the flavors of the dishes, rather than overpowering them.

The mood: The young and fashion-conscious feel at home here in Barcelona’s upscale Eixample district.
The damage: €€; six courses
When to book: At least a week in advance

For a low-key multicourse — hold the jamón

There was a time when vegetarians visiting Barcelona had to make do with a few lettuce leaves and a lump of cucumber or, at best, some gazpacho and a tortilla española. But the veggie scene is evolving fast, as evidenced by a growing number of vegetarian and vegetarian-friendly eateries. Rasoterra has designed an upscale take on the movement, creating a fully vegan six-course tasting menu made entirely from local, organic produce, with bestsellers including refreshing ajoblanco (an Andalusian cold soup of crushed almonds and garlic, salt, and olive oil); black rice with seaweed and asparagus; and maitake mushroom and black bean tacos. The tasting menu can also be made gluten-free on request.

The mood: Wooden tables and unfussy design keep things weeknight-casual.
The damage: €; six courses
When to book: Same day or a few days out to be on the safe side.

For a clutch deal on world-class tapas

It’s still unclear how chef Miquel Pardo is able to serve a dinner of nine tapas, a rice dish, and two desserts for €40 (seven courses for under €30 at lunchtime) at Cruix, but no one is complaining. Pardo learned his trade working under some big-name chefs, including a stint with Albert Adrià at Heart Ibiza, before setting up Cruix in November 2017. You’ll find global influences aplenty here, in standout dishes that include a twist on a nigiri with Catalan fuet sausage instead of raw fish, a ray and tequila taco, and green curry ice cream.

The mood: Contemporary design, great service, and an unrivaled price point combine to attract a mixed international crowd of locals and visitors.
The damage: €-€€; seven to 12 courses
When to book: A few days in advance or a week ahead for weekend bookings.

For a custom menu made just for you

Enjoy the full tasting-menu experience tailored precisely to your budget at one-starred Oria, located in the high-end Monument Hotel. Executive chef Martín Berasategui (the most Michelin-starred Spanish chef of all time) is from the Basque Country in northern Spain, and it shows in specials such as creamy rice with Iberian ham and Idiazabal cheese, and wild hake with clams and salsa verde. The real draw here is the custom-made tasting menu, specially designed to fit the budget and tastes of each group. Choose either six courses for €65 or seven courses for €85 and a menu will be adapted around the produce in season and your particular likes and dislikes.

The mood: Well-to-do hotel guests and glitzy diners enjoy exemplary yet unsnooty service in this comfortable hotel-lobby dining room.
The damage: €€€; six or seven courses
When to book: Same day for lunch, a week out for dinner.

When the youngest French chef ever to be awarded a Michelin star sets up shop in a swanky five-star hotel, grandiose things are bound to follow. Fine dining is notoriously rich and sumptuous, but chef Romain Fornell gives opulence a new meaning at Caelis, combining lavish ingredients like caviar and king crab, or lobster and artichoke, in a way that is positively extravagant and equally delicious. His royale of foie gras with smoked eel and cherry is the kind of thing you’ll want to eat in total silence with your eyes closed.

The mood: Formal, but friendly, and attentive staff are on hand to cater to your every whim.
The damage: €€€; 14 courses
When to book: A week ahead of time, or two for a weekend booking

For locavore Catalan cooking with an unusual pedigree

Raised in Canada, the son of Catalan emigres, chef Jordi Artal spent 10 years working in Silicon Valley before returning to his ancestral home and teaching himself to cook. He has since been awarded two Michelin stars at Cinc Sentits, the restaurant he opened in 2004 with the help of his mother and sister. A pioneer of the Catalan slow food movement, Artal works exclusively with locally sourced meat and seafood and organic, seasonal and local fruit and vegetables. His food pays homage to great produce, like in the “sardinada,” simple sardines and tomatoes celebrated in a pair of dishes: first a torched sardine atop fermented, long-braised tomatoes and bread; then, a hollowed-out tomato stuffed with tomato tartare and tomato sorbet and decorated with garlic flowers. This is simplicity with a two-Michelin-star twist.

The mood: Dress to fit in with the rather serious vibe in the bright-white minimalist dining room.
The damage: €€€€; around eight courses
When to book: A few days in advance is usually enough, but give it a week in peak tourist season.

For when it’s all about the wine

One of Barcelona’s newest Michelin-starred establishments is an understated affair led by a young chef who has a penchant for natural wine. Everything feels distinctly now, from decor to the clientele, and the dishes made from fresh, local ingredients are lighter and considerably less overbearing than your average Michelin-starred grub. The wine pairing is as much a draw as the food itself, and focuses on natural, organic wines from small producers. The seasonal menu, which is also excellent, may include favorites like the creamy squid tartare and the rich, yet refreshing, salmorejo (dense breadcrumb-based gazpacho) with red shrimp.

The mood: The intimate dining space in the lobby of the otherwise somewhat-square Hilton Diagonal Mar attracts a trendy crowd.
The damage: €€€; 12 courses
When to book: A few days in advance.

Isabelle Kliger is a half-British, half-Swedish freelance journalist who moved to Barcelona 11 years ago and spends her time writing about travel, food, and pop culture.