HONG KONG — Vicky Lau says while she has had a lifelong passion for food, it was a sense of sheer necessity that led her into the kitchen to cook for herself.

Lau was a student in New York — hungry and very far from home — when she first tried to recreate the tastes and the textures of Hong Kong. It was the start of a journey that would lead Lau to earlier this year becoming the first Asian woman to receive two Michelin stars, for her work in the kitchen of Tate Dining Room, the “French Chinese” restaurant Lau runs on historic Hollywood Road.

“It all really started when I moved to the U.S. and I started craving food from home and I started experimenting,” explains Lau, 40, during a recent weekday visit to Tate Dining Room.

“I had moved to New York, where the food is really diverse. The Food Network was really booming. It was constantly on my TV and I was experimenting. Some things would work, some would not work. When they didn’t work I wanted to know why. It is pretty close to design, which is what I was studying at the time. You take raw ingredients and you create something and I love that it’s very sensual.”

Lau was studying graphic communication at New York University then, and says she felt a connection between these two worlds — of creative design and of cooking. Later, after working in design back in Hong Kong, she took off with friends for a three-month course at the Le Cordon Bleu Dusit in Bangkok that evolved into nine months and a diploma, and the decision to make the career change formal. 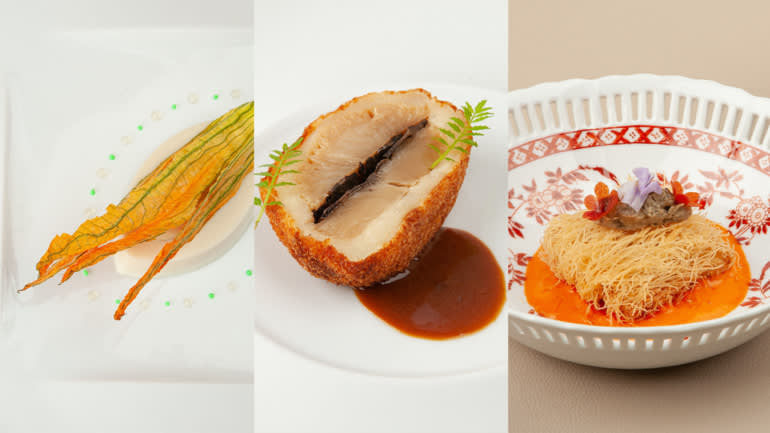 Time was then spent then at what was the fine-dining restaurant Cepage in Hong Kong — under head chef Sebastien Lepinoy, whose culinary linage traces back through French master Joel Robuchon.

By 2012, Lau was ready to chart her own culinary course, and so opened Tate Dining Room with the ethos of following an “exploration into culinary expressionism” with a focus on “flavors and textures.”

“For me, another thing that attracted me to cooking is that it is very crafty,” says Lau. “I love making things with my hands, like ceramics. I love all of that. Today you don’t get a lot of that because so much is factory made. But food is still one of the things that have to be crafted by hand.”

Lau admits to often peeking out from the kitchen at Tate Dining Room to watch the reaction of dinners when their dishes are served.

“It’s the ultimate,” she says. “In the world I was in before, you would design things but you never got to see people’s reactions. With food you always see the reaction.

“With a restaurant it’s all about who we share the food with. The food enhances that experience. So, having great food helps create conversation and I love that. I love to have people sharing that story, of the food, and to see them having that experience.” 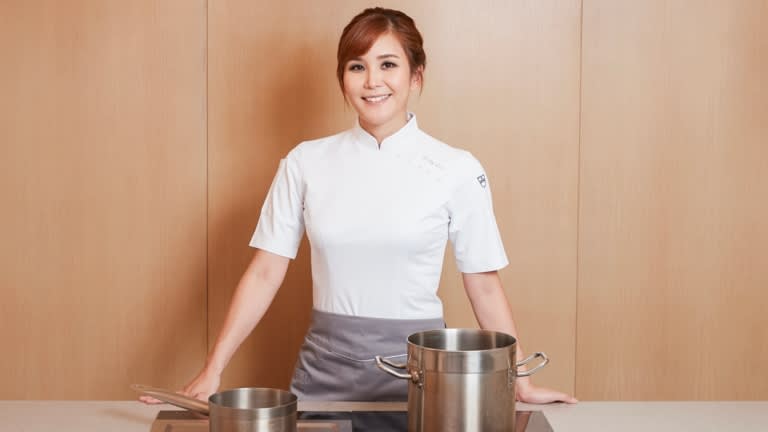 “Everything I want to express is on the plate,” says Lau. (Photo courtesy of Vicky Lau)

In terms of the recipes Tate Dining Room leans on, they all come back to Lau — and she admits to feeling the pressure that comes with expectation, as the restaurant was an immediate success, and now that more has come with a second Michelin star, to add to the first, awarded back in 2013. Lau says her dishes reflect her personality — creative and goal-orientated and, away from the kitchen, very private.

“Everything I want to express is on the plate,” she says.

“But that’s the difficult part,” says Lau of the process of creating new dishes. “I think that’s one of the reasons chefs have such ego issues. It’s because every day is like you are onstage. You have to give your best and if you don’t have confidence you beat yourself up and there is a downward spiral.

“But to me a dish is like giving someone a gift. It needs to be attractive on the eyes, to give the feeling that someone has taken care of it, thought through it. I’m quite spiritual so I believe I’m channeling something with my recipes.”

The people at Michelin rightly made much of Lau being the first Asian woman to receive a two-star rating, a remarkable fact on so many levels.

Dr. Siu Yan-ho, of the Department of Chinese at Hong Kong’s Lingnan University, lectures on the connection between food and culture. He says Chinese kitchens have long been trapped in a “1950s male monopoly” but in recent years they’ve moved toward “a less feudalistic concept of ‘putting men before women.'” It is chefs such as Lau who are helping times move forward — fast. 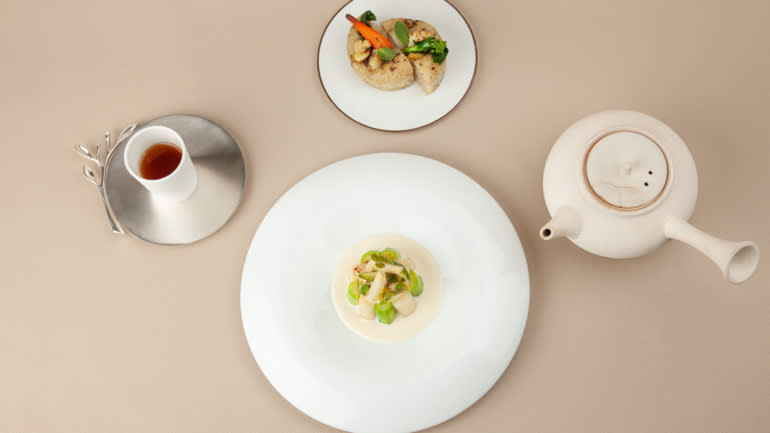 Lau says she had to make her voice heard, at first, when she was learning her craft, and learning in male-dominated kitchens.

“I think in Asia there has been a cultural perception that a woman’s place is not in a professional kitchen,” she says. “It has to do with the view that this work is labor, it has long hours. But that is changing. There’s absolutely no difference between a male chef and a female chef, so I think really we just should think that way. We are all chefs.

“These kinds of awards help. They have raised the profiles of chefs a lot from back in the day when parents might have said don’t go into the kitchen. The thinking was that people who didn’t study or go well in school would go into the kitchen. Now people are more open to entering the kitchen and people can see where it can take you.”

There is also change going on in the way the world looks at food, and how it is prepared — and sourced — and Lau sees in this evolution the next stage of her journey.

“With me it’s always ingredient first,” Lau explains. “I love very humble ingredients like tofu. I love the culture part of it and how, like on our vegetarian menu, we can cite a recipe from the Song dynasty (960-1279).

“I believe the food world is evolving and will evolve in the next 10 years. I’m happy to be rolling with this movement that sees that we need to change the way we see food. How we treat the food. I want to push these boundaries. It’s my dream to open a vegetarian restaurant. People think I’m crazy — but that’s where I want to go.”