Combining a truly unique, mouthwatering Thai menu with a full bar, then placing the concept in an extremely modern, lounge-like setting and adding in the benefit of daily and nightly specials, it’s no wonder that Thaicoon Restaurant & Pub has become one of the hottest new restaurants in Katy and the rest of Greater Houston. To get the low-down on this awesome, one-of-a-kind gem, the General Manager and good friend of the owner Lisa Nguyen made herself available for comment.

A Dining and Drinking Experience Years in the Making 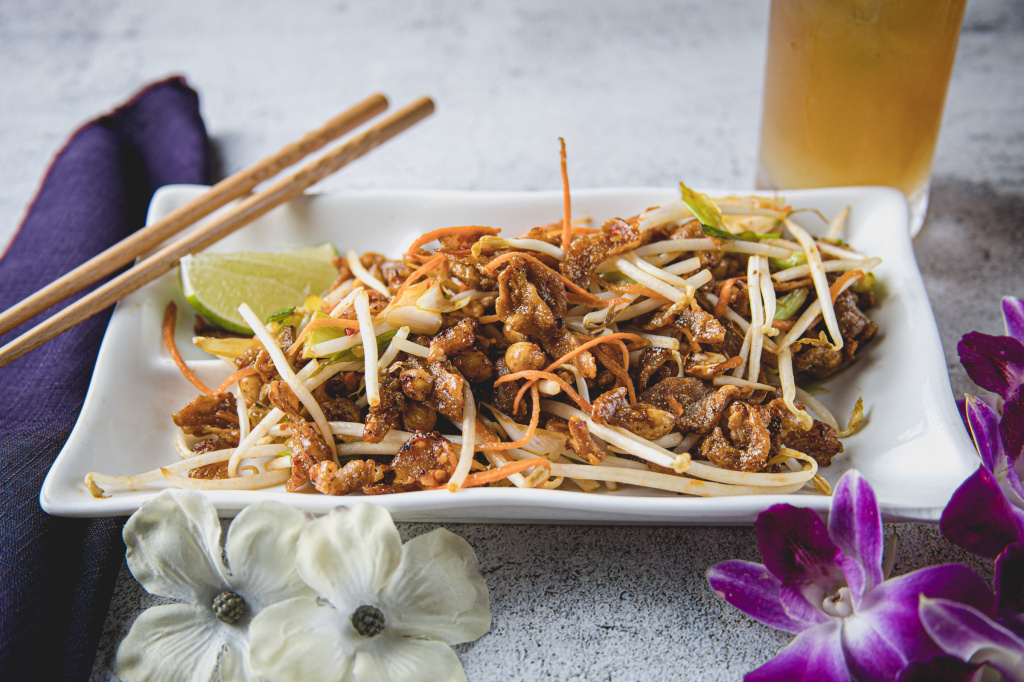 Back in 1998, Kevin Dong met an accomplished pastry chef, Lisa Nguyen, who would go on to become good friends with him and his wife Olivia. Many years down the line into their friendship, the group was sharing a casual dinner and they began discussing different pubs around the world. Dong couldn’t get the idea out of his head to combine a traditional pub with a Thai restaurant of all things. The idea not only stuck but flash forward a decade later and the first thing Dong did was handpick Nguyen to be the GM of the new concept out in Katy, TX.

After perusing the food and drink menu, you’ll have a solid idea of what makes them so unique. For example, if you love Thai food, you’ve no doubt tried multiple variations of Pad Thai, but probably never Crispy Pad Thai served with not just shrimp but delicious crispy crunchy pigs ear lightly coated and tossed with bean sprouts, carrots, green onion, and peanuts in spicy pad thai sauce.

“We’re constantly adding new items and specials every month,” Nguyen says. “If you follow the Thaicoon Facebook page, you’ll see all of our latest creations.” 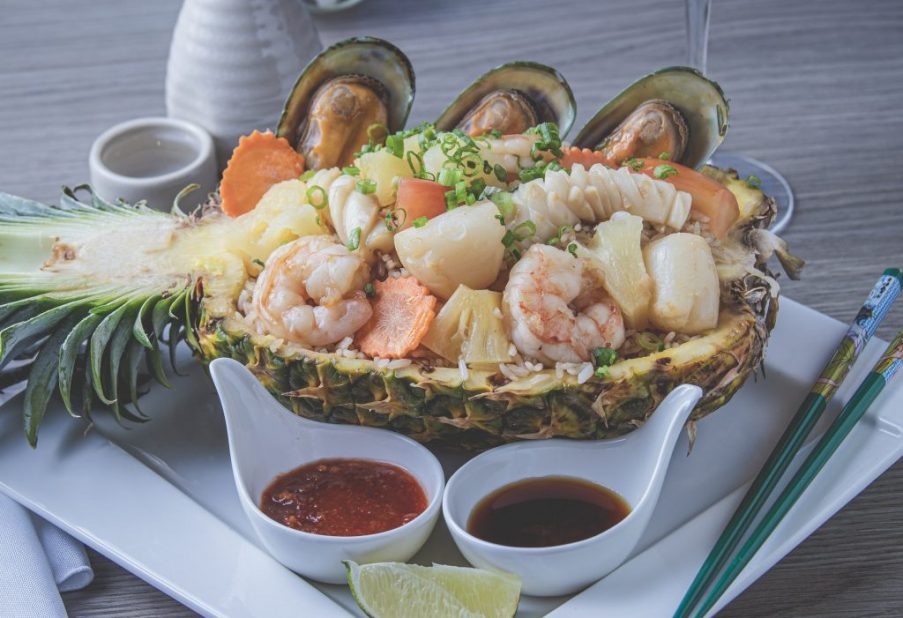 One of their many mainstays includes the Steamed Fish with lime chili sauce (Pla Nung Manow), served on a heated platter. A favorite of Olivia Dong’s, the Tamarind Duck Thigh is fried duck leg served with sauteed Chinese broccoli and spicy tamarind sauce. Their Thai Beef Salad is another big hit (Yum Nua). And the Pineapple Fried Rice? It’s served on an actual halved pineapple shell.

Dong and Nguyen partnered with their Executive Chef Pete Immanivong after originally meeting on the Asian Eats Facebook page. Through never-ending collaboration, the meticulously selected menu doesn’t fail to make the impressive space proud. Every menu choice is garnished to perfection when plated, and the finished presentation when brought to the table just sizzles with creativity.

After finding some recent inspiration at a hot spot on the Las Vegas Strip, Dong and Nguyen noticed how fun, beautiful animal shapes were carefully molded to accompany meals. Holding the added benefit of doubling as a culinary artist with 25 years of expertise, Nguyen started doing something similar by handcrafting some mousse-filled animal shapes of her own, then infusing them with alcohol.

Aptly named “Boozy Bears,” these brand-new desserts feature cute names and are made with anything from Kahlua to Luna Nuda Prosecco. If you start seeing Boozy Bears blow up across Instagram, you know who came up with them first. 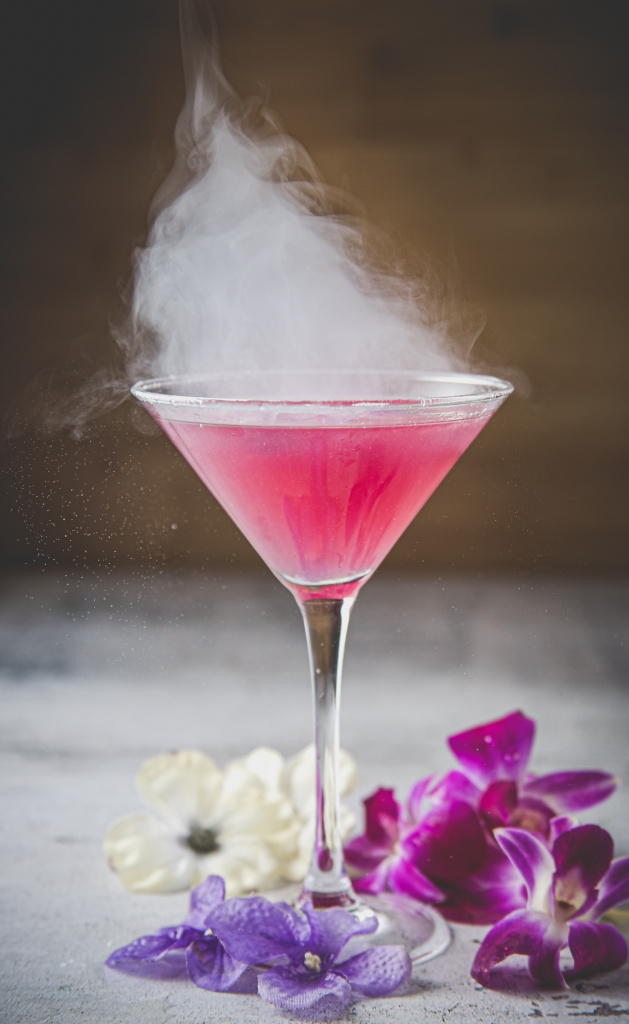 With an atmosphere that’s both modern and vibrant, guests love the open layout and comfy upholstered dining chairs. Dazzling light fixtures hang overhead and the walls wow guests with splashy designs. When asked about the ambiance, Nguyen can’t help but laugh. “Kevin just put some stuff together and it actually works,” she says.

With daily specials, there isn’t a happy hour at Thaicoon that many people like to miss. Mondays offer all glasses of wine for only $5, followed by Tequila Tuesdays ($5 tequila-based drinks and $4 wells), Whiskey Wednesdays ($5 selected whiskeys), Martini Thursdays ($5 martinis), and an open Friday with $5 shots and $4 draft beers from 4 to 11 pm. Even Sundays feature $5 pineapple mimosas during brunch, and scrumptious appetizers are on the happy hour menu for bar patrons each day as well.

“Weekdays are usually casual for family and friends who get together for conversation, and weekends get a little louder,” Nguyen says of the everyday vibe.

Firmly rooted in the Katy community, GM Lisa Nguyen owes gratitude to their growing base of regulars who frequently sit at the bar and chat with the staff. In fact, much of their clientele has now become really good friends of theirs. The same applies to their neighboring establishments too.

“The Katy area has been very supportive, especially the other businesses around us,” Nguyen says. “Everyone attends each other’s restaurants and stores. Without them, we wouldn’t have been able to survive this pandemic.” 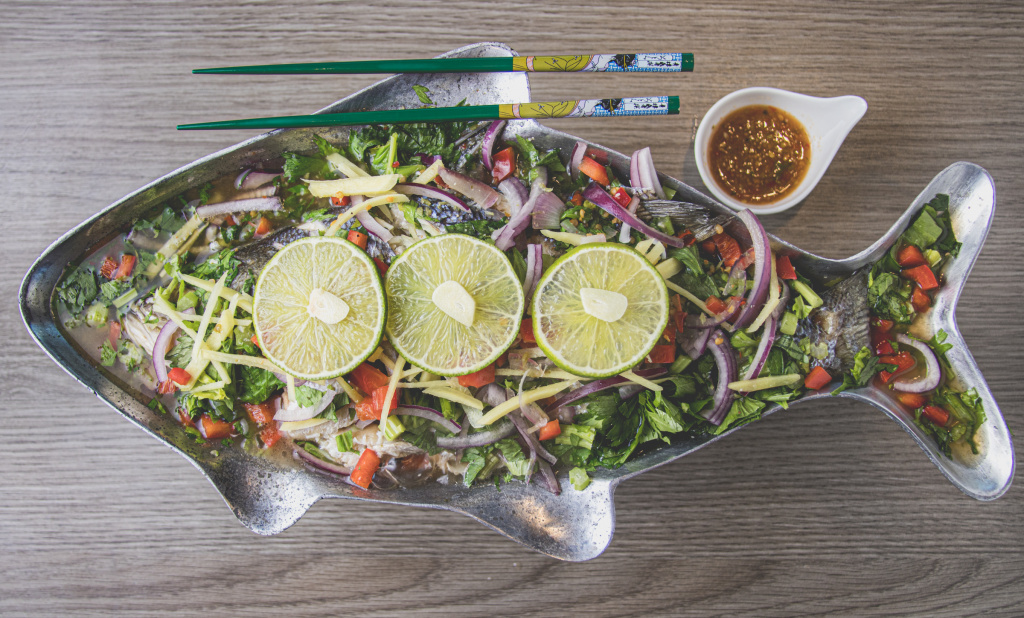 With this location continuing to take off, a second location is currently in the works for Pearland, and a couple of years down the line, the ownership is also eyeing up another innovative new concept in The Heights that will feature similar food via the help of Chef Pete. In the meantime, you might consider becoming a regular while the Thaicoon empire is still in its early stages – especially since they would love to have you.

“The way we treat our customers, we become family with them,” Nguyen says. “They just keep coming back.”

Located at 223 Grand West Boulevard B101 in Katy, TX just off I-10 near Hwy 99, Thaicoon opens at 11 a.m. seven days a week. For more info or to check out their menus, visit their website.