While many see versatile maiz as the foremost plant in Mexican cookery, cactus occupies a more symbolic role for many Mexicans.

You can literally see this by examining the Mexican flag, which depicts a prickly pear cactus atop which an eagle perches as it devours a serpent. The image commemorates how the Aztecs founded Tenochtitlan (now Mexico City) in the 1300s. According to legend, the wandering Aztecs would know where to build their new city when they saw an eagle perched on a cactus.

Related: These 6 Mexican-inspired recipes will satisfy your restaurant cravings at home

“The cactus is our biggest food representation in Mexico and a history you grow up learning since you’re a kid,” said Alex Tellez, executive chef of Sor Ynez, a traditional Mexican restaurant in Philadelphia.

“The cactus is our biggest food representation in Mexico and a history you grow up learning since you’re a kid.”

Nopales were a staple of Tellez’s childhood kitchen, though he didn’t see many cactus plants around his native Mexico City. Yet every time he visited extended family in nearby towns like Tlaxcala, Tellez got to witness firsthand the formidable task of harvesting these prickly succulents.

“It was very intimidating,” he said. “I remember my grandfather and uncles would take these super-sharp machetes, slice [the cactus] pretty fast and catch it with a basket. Then my grandma would actually hold the cactus and clean and slice it herself.” 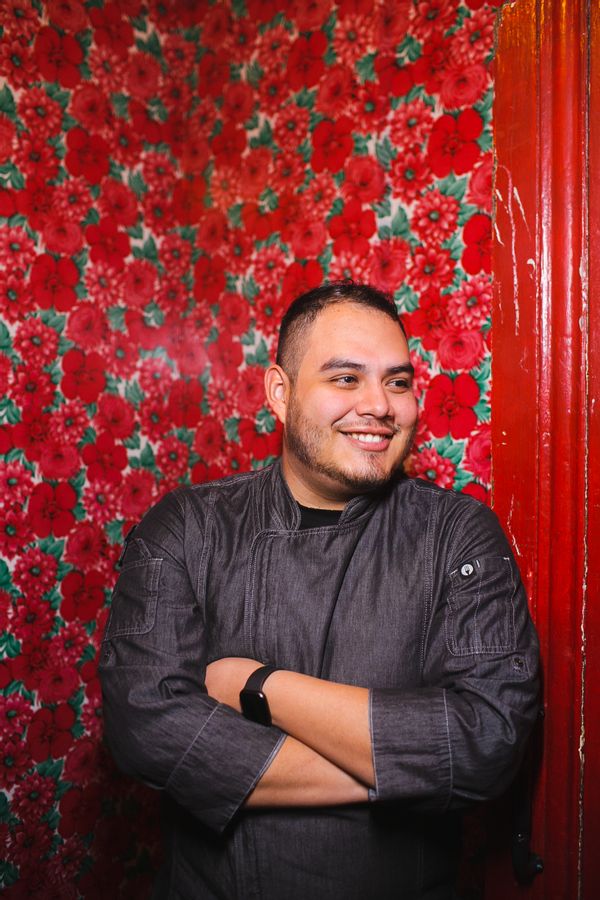 From these ferocious origins, Tellez’s grandma, aunts and grand-aunts would manipulate the fiber- and antioxidant-rich nopales into every edible form imaginable. Blitzed into smoothies with celery, parsley, cucumber and fresh orange juice for all-day hydration; sliced raw to lend sour, crunchy freshness to salads; sautéed and stirred into soup or scrambled eggs; quick pickled (en escabeche); or braised or grilled then nestled into tacos — ¡lo que quieras, por supuesto!

You don’t need to wield a machete while mining the supermarket produce aisles for nopales; (thankfully) you’ll usually find tongs near the display. When selecting cacti, Tellez recommends looking for medium or large flat paddles, which are easier to trim. However, you do “need to feel comfortable and confident touching the cactus to clean it,” Tellez said. (I’d also recommend a clean pair of gardening gloves.) To remove the spines, hold the end of the paddle and scrape them off opposite their growth direction using a sharp knife or vegetable peeler.

You don’t need to wield a machete while mining the supermarket produce aisles for nopales.

Cactus bears likeness to moisture-rich okra — not least of all for a characteristically slimy texture, which some find off-putting. (Cacti produce this gooey liquid, known as mucilage, to seal water inside, which helps them survive desert-dry conditions.) To remove this, Tellez suggests sautéing the nopales for a good five minutes over medium-high heat, then rinsing them thoroughly in the sink. From there, your imagination is the limit.

At Tellez’s year-old Philly restaurant, seared nopales top tlayacos (boat-shaped masa cakes) with black beans and queso fresco. He loves adding pickled cactus (recipe below) to carnitas, birria or barbacoa tacos to cut through the fattiness of the meat. He also steams chopped nopales in banana leaves with eggplant, squash and celery root for a vegan mixiote; adds raw slices to a bright radish salad with crumbled feta, lime juice and olive oil; and purées raw cactus along with cilantro leaves to mix into Sor Ynez’s chewy, green-hued tortillas. It’s all part of a larger commitment to educating diners about the traditional, vegetable-rich cooking of Tellez’s Mexico.

“We make traditional Mexican dishes, which have a lot of vegetables, and people were so confused at the beginning, like ‘I thought you were a Mexican restaurant!'” he said. “I’m taking this experience as a chance to educate people and share knowledge with all these different ingredients. We keep getting busier, so I think it’s working.”

Perhaps Tellez’s favorite use for nopales — and the way he converts the cactus-averse — is through his grand-aunt’s nopales en escabeche, a sharp, salty quick pickle that’s seasoned with Mexican oregano, garlic and black peppercorns. For best results, allow it to sit for three days in the fridge.

Cook’s Notes
“It has to be Mexican,” Tellez says of the oregano.

I like to cut the carrot on a slight bias for prettiness.

My local Mexican grocery store not only sells cactus paddles but also bags of blessedly pre-trimmed and pre-diced cactus (in case you’re not feeling up to the task of cleaning these prickly buggers).

More by this author:

Salon Food writes about stuff we think you’ll like. Salon has affiliate partnerships, so we may get a share of the revenue from your purchase.