By Elizabeth W. Jernigan 11 months ago

The Peaky Grinders crew is busy at Railway Heights Market.

Railway Heights Market, 8200 Washington, began its soft opening August 4. The new market hall comes from Nomad’s Hospitality, the creators behind Conservatory Food Hall, the first food hall in Texas and Bravery Chef Hall, the first chef hall in the United States, according to a press release.

The new market hall is located on three and a half acres in an area that intersects with a number of fast-growing communities, in keeping

By Elizabeth W. Jernigan 11 months ago 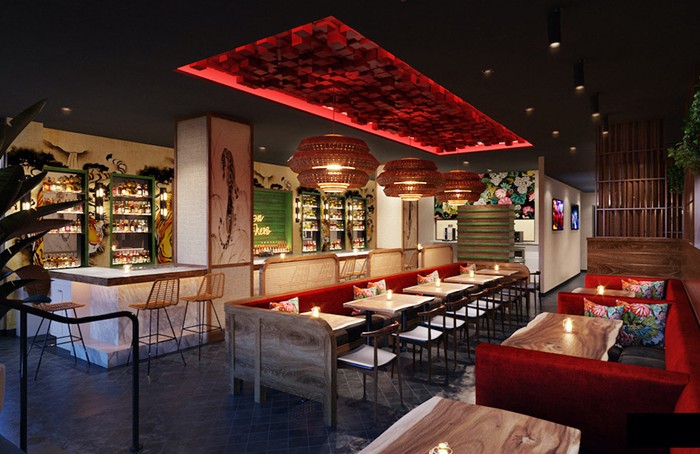 A rendering of Jia, the upscale Chinese-American restaurant and dinner club opening in Miami’s South of Fifth neighborhood.

Jia, a modern Chinese-American dinner club with a private lounge, has opened in Miami Beach’s South of Fifth neighborhood.

The restaurant is a collaboration between Ken Ray and Jason Cloth. For the past several years, Ray has focused on the food tech sector, launching À la Carte Delivery, which markets more than a dozen Miami ghost kitchens. Cloth is director of Bron Media Corp. and founder/managing

Chino Bandido opens July 8 at its new home in Phoenix

By Elizabeth W. Jernigan 12 months ago

PHOENIX — Chino Bandido, a restaurant known for its combinations of Chinese, Jamaican, and Mexican flavors and that was featured on Food Network’s Diners, Drive-Ins and Dives, opens Thursday, July 8, at its new spot in Phoenix.

For 31 years, the hole-in-the-wall joint had been located in a strip mall near 19th Avenue and Greenway Road. It will now be located two miles up the road at Bell Road and Third Avenue, near the WinCo grocery store.

By Elizabeth W. Jernigan 12 months ago

Nearly a year into business, a popular Eastern Market restaurant is finally welcoming customers to dine inside. At the same time, the owners have changed the cuisine completely.

The Chinese dishes they served carryout over the past 11 months or so — salt-and-pepper tofu, biang biang lamb noodles, wonton soup, bao buns and more — have all been shelved to make way for a brand new menu featuring cuisines the two chef and owners say better reflect their personal backgrounds.